An automotive garden party in the heart of the City: 8th - 10th June 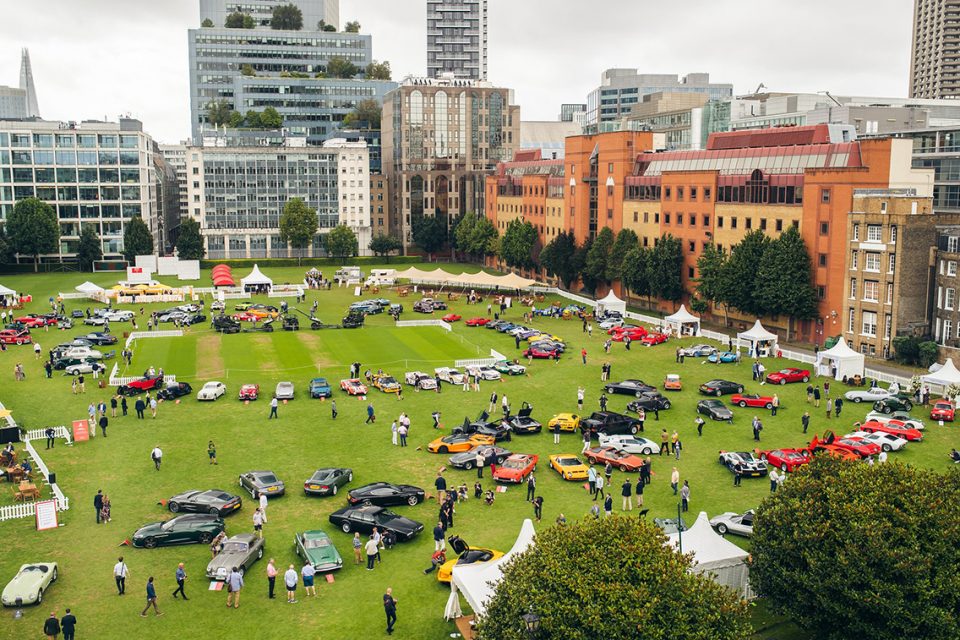 The City of London is about to clink champagne flutes once again and fire up over £50 million-worth of supercars and classic automobiles for the 2021 edition of the London Concours.

Held on 8-10 June at the Honourable Artillery Company, a grassy five-acre oasis in the heart of the City, this annual summer garden party and celebration of horsepower has been extended by an extra day to reduce crowd sizes and increase the number of exhibitors. So, a shorter queue for the Veuve Clicquot, plus a lesser wait to try the Maserati MC20 out for size (this being the UK premiere of the trident marque’s mid-engined halo car).

Now in its fifth year, the London Concours brings car collectors, design connoisseurs and seasonal socialites together on the ground’s lush cricket pitch to kick the tyres of 100 of the finest works of art to be fitted with steering wheels. This is the first major automotive event of 2021, so the atmosphere will be one to savour.

Scanning the entry list, there are a number of vital machines that may distract from everything else around. May I draw particular attention to the blue Ferrari 250 SWB ’61 Sefac Hot Rod’ which, in 1961, was the fastest and most successful GT race car in the world. This specific car was raced by the legendary Stirling Moss in six races, including Silverstone, Goodwood and Daytona, clinching the Englishman five memorable victories.

Porsche fans are in store for a treat with an expertly curated selection, from the 1955 356 T1A GS Carrera Coupe and ducktail-sporting 911 2.7 RS to the 930 Turbo and the ultimate late-80s bedroom wall poster space hogger, the Group B rally-bred 959 road car.

Italy and Germany’s finest are outnumbered, though, by the Brits. As iconic as Michael Caine moseying around a Brutalist car park with a shotgun, these include the Mini, the Range Rover, the Jaguar E-Type, Le Mans-inspired Jaguar XJR-15, Rolls-Royce Phantom Coupé, Aston Martin One-77, and Gordon Murray’s Light Car Company Rocket. There will be live talks with the designers of some of these engineering milestones, as well as a dedicated Lotus zone. Lightweight masterpieces will include a Lotus Eleven, raced by company founder Colin Chapman himself, a ‘Type 14’ Elite, and the Norfolk firm’s revolutionary new electric hypercar, the 1,973bhp Evija.

This year, the award categories comprise The 200mph Club, which includes McLaren’s F1 and Senna and Ferrari’s F40 and LaFerrari; 1960s Italian Berlinettas, like the De Tomaso Mangusta and Ferrari 275 GTB6/C; the special celebration of legendary sports car brands Porsche and Lotus, from the 1950s through to today; supercars, including the 304.77mph Bugatti Chiron; lost marques, such as Iso, Jensen and Unipower; mid-century American kustoms (with an all-important ‘k’); young timers from the 1980s and ‘90s, with a focus on performance-tuned Audis, BMWs and Mercedes; iconic British designs and, in particular, an homage to the E-Type on its 60th anniversary. Eleven of the most mint and/or significant E-Types will be on display, including valuable Lightweight Coupés and the inimitable 1974 Group 44 race car.

Sexagenarian YouTuber and EVO magazine co-founder Harry Metcalfe, of ‘Harry’s Garage’ fame, is this year’s featured collector. He’s brought 16 of his toys down from his Cotswolds farm, including his 1987 Ferrari Testarossa ‘Monodado’, which he recently drove to the Sahara Desert, his 1987 Lamborghini Countach 5000 QV, 2015 Jaguar Project 7 and 2018 Jaguar Project 8, plus a handful of Paris-Dakar-spec motorbikes.

The biggest bang takes place on Day One, with judges deciding on the seven categories of concours winner, based on such qualities as rarity, significance, character, condition and presentation, plus the car to be awarded this year’s prize for best-in-show. This VIP and media day ends with an exclusive cocktail party. Day Two throws the spotlight on style, and invites guests to don their finest attire and browse luxury goods from watchmaker Breguet and 007’s tailor, Anthony Sinclair, among others (James Bond’s BMW Z8 from The World Is Not Enough will also be present).

Day Three, which is likely to be the most-attended, is all about supercars, with exotic manufacturers and owners bringing their latest Ferraris, Lamborghinis and Bugattis into town. Finally, the streets of the capital will come alive again.

After 15 months of minimal motoring and social occasions, one is in danger of becoming oversaturated and leaving with your own potentially priceless set of wheels. You have been warned.

Tickets to the London Concours are on sale now at www.londonconcours.co.uk/tickets, from just £25. Enter the special code AM21 to enjoy a 2-4-1 reduction. VIP guests will be treated to a three-course champagne lunch menu by Searcys, and private hospitality is available.