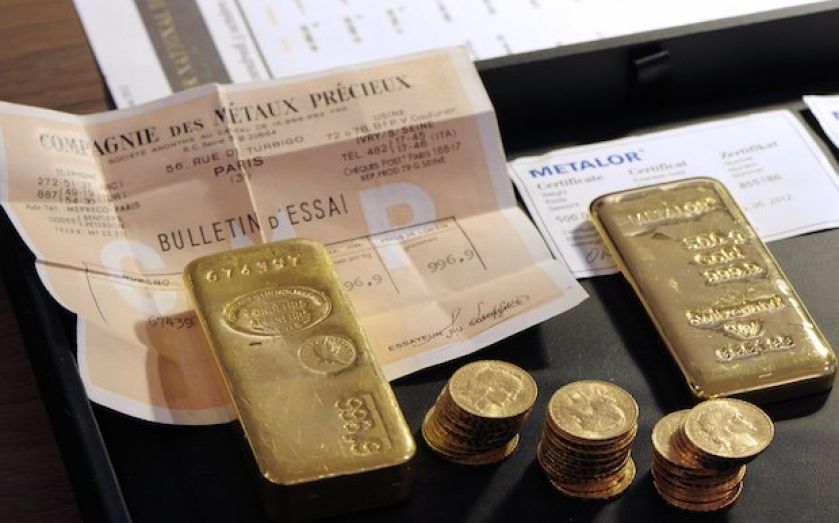 With last year's 28 per cent price crash – suffering its sharpest fall in 30 years – it wasn’t just gold bugs and mining companies who have had to endure gold’s bumpy road, as its crashing popularity signalled a shift in economic confidence, upping the favour of paperless assets.

This year, things have started to look up a bit for the yellow metal. From late 2013, a number of analysts said that gold had hit a floor, as the price of gold began to correct. Think tank Capital Economics said that, with sentiment already so heavily negative, the risks for 2014 were firmly skewed to the upside.

And three months into the year, ongoing geopolitical tension – the turbulence in Ukraine, and protracted worries about the slowdown of the Chinese economy – have sent investors heading back towards the dependable safe-haven asset. On Monday, bullion fleetingly brushed a six-month high on safe-haven appeal.

Earlier this week Credit Suisse said volatility trends are lower across commodities, with the only exceptions being oil, and gold.

US Fed officials will speak later on, following on from Janet Yellen’s mid-week surprise hints that interest rates could rise faster than expected – a move that scared markets.

Although things are far from settled for the gold price, a note out today from WH Ireland puts forward a very optimistic position on the precious commodity.

First, says analyst Paul Smith, there’s still considerable demand for physical metal. On the recent World Gold Council on demand, consumer demand was at a record high last year, up 21 per cent from 2012.

Most of the demand was supplied from exchange-traded funds (ETF) liquidating their physical gold for buyers mostly in India, China and the Middle East. ETFs lost 881 tonnes of gold last year.

Third, WH Ireland's view is that investor sentiment, which has been at an all-time low, has now turned. The largest ETF, SPDR Gold Trust, saw the first monthly gain since the end of 2012, increasing its holdings by 10 tonnes at the start of this year.

Fourth – albeit self-fulfilling – recent geopolitical events have actually reinforced and promoted the safe-haven asset quality of the metal.

WH Ireland explains that, with gold, it’s not a supply problem, but an accessibility one:

Gold is not in short supply, there is lots of it stored in vaults around the world, but most of it is not accessible.

And that, at the moment, something unprecedented is happening: wealth is moving from West to East, where it’ll be stored in vaults and as jewellery. The broker believes this could be a permanent move for it.

But given the view it’s put forward on upsides for commodity, it “sees scope” for an upward revision in due course, with impacts on stocks it covers: Caledonia Mining, Goldplat, Highland Gold, Pan African Resources and Vatukoula Gold Mines.

Of course, not everbody shares WH Ireland's view. This afternoon, Deutsche Bank said the mid-cycle correction in the price of gold that started late last year "is at risk of unraveling heading into the second quarter", owing to an improvement in economic data in the US, a rise in US real yields and a strengthening in the dollar.

Investors might get excited, but whether the gold price will see a sustained recovery is another question.