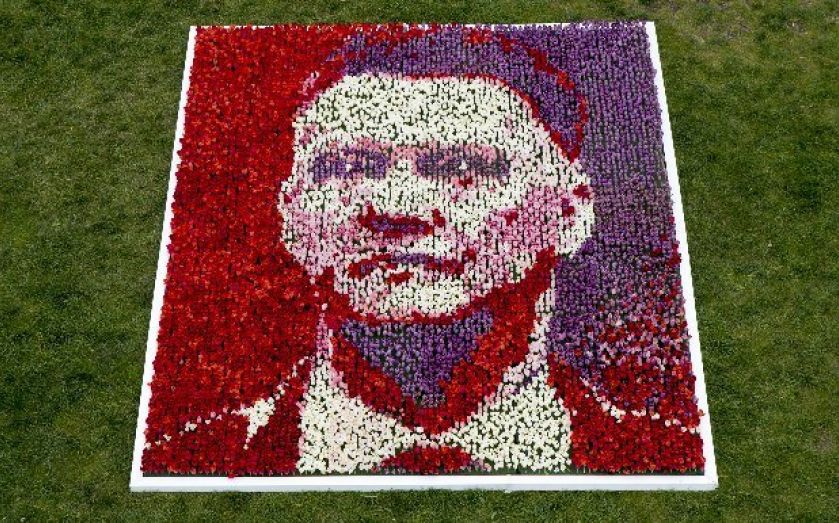 The FTSE 100 listed firm hired a team of expert florists who started work at 6am on Wednesday to produce a mural portrait of the Dutchman made out of 25,000 red and white tulips in time for his first training session at the club.

The flowers were imported from the Netherlands, the country that Van Gaal led to a World Cup semi-final before taking the reins at the Manchester club.

Even after a disastrous succession season to Sir Alex Ferguson that saw Manchester United fail to qualify for the Champions League under David Moyes, hopes are high at Old Trafford as Van Gaal takes charge of the most successful Premier League club.

United’s title odds were slashed from 8/1 to 6/1 since the Dutch supremo was given the job. Those odds were trimmed even further to 5/1 after a great World Cup, where Van Gaal's Oranje side shone and the 62 year-old was credited with getting the team tactically spot on.

His relationship with striker Robin van Persie during the tournament also bodes well for the Manchester club, with the two now working together at United.

The former Barcelona, Ajax and Bayern Munich man, known for his authoritarian, no-nonsense approach, has targeted instant success at the United and is expected to be busy in the transfer market as the club look to bolster their squad.

“Van Gaal’s club record is outstanding, he has just had a fantastic World Cup with the Oranje, and his no nonsense-style is sure to further enrich the world’s greatest league,” said William Hill spokesman Jem Maidment.

“He is of the great characters in world football – his arrival merely confirms the Premier League is the place to be, even if England’s national side continue to disappoint us all."

Football fans who want to take a look at the 18 by 12-foot portrait of the Dutch manager's face can pass by the National Football Museum in the city's Cathedral Gardens.