What is devo-max and what new devolution powers will Scotland have after the independence referendum results? 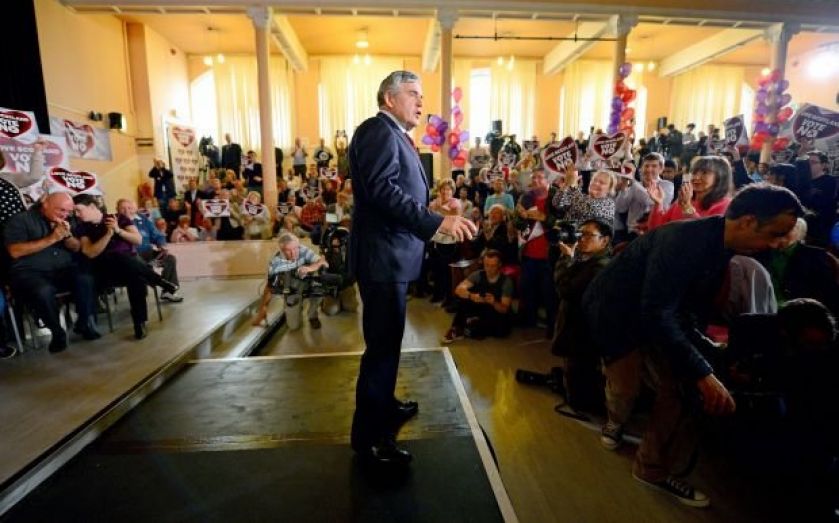 Currently, Scotland can make policy across a range of areas, including healthcare and education. This is why university is free in Scotland, even as tuition fees soar in England.

Westminster rules the roost when in comes to some key areas: immigration, foreign policy, energy and, of course, the constitution.

After today's referendum we are probably looking at a quasi-devo max and it isn't entirely clear what power will be vested in Salmond and the Scottish parliament.

Gordon Brown, who after saving the world has now saved the union, said that today's vote would be a starting gun for a process to devolve further powers to Scotland.

Brown has a 12-point plan for devolution and vowed in an impassioned speech yesterday that work would begin today on the new legislation.

The alternative to an irreversible separation is a more powerful Scottish Parliament with a timetable for its delivery.

Quite simply, Scottish voters deserve to know to the fullest extent possible about how new powers as ambitious as possible will be delivered as soon as possible within the UK.

So, we are demanding a tight timetable with tough deadlines and streamlined procedures.

The possibility of more powers for Scotland has led to the inevitable questions regarding Scottish MPs' influence on English politics. In response, David Cameron has promised a short devolution revolution.

The issue is unlikely to be solved quickly, even if Brown's plan to debate the issue of devo-max in parliament on 25 October comes to fruition. What powers are devolved and to who is likely to be dragged out to the general election.

Here is a table showing the current breakdown of powers:

And here is what the greatest possible devo-max would look like: