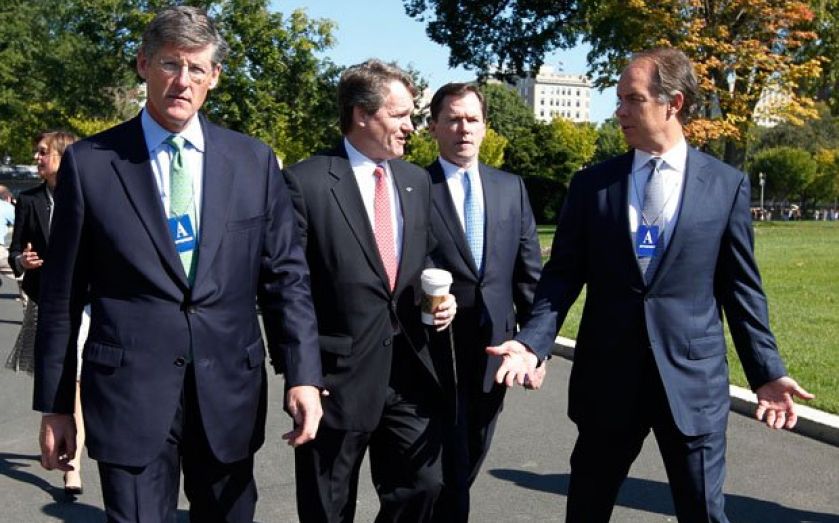 THE HEADS of the biggest banks in Wall Street and Europe yesterday met President Obama to warn him of the dire consequences if the US defaulted on its debt obligations as the US government shutdown continued for a second day.

Goldman Sachs chief executive Lloyd Blankfein said he and his fellow banking bosses had warned President Obama “exactly how bad it would be.”

The meeting was organised by the Financial Services Forum, a group formed from the chief executives of the largest financial services firms doing business in the US.

“We’re here as representatives of the financial system, and so we are in a position to really know early what the consequences are.

The White House meeting came on the second day of a partial government shutdown after politicians still failed to reach agreement on a budget for the new financial year.

But for bankers the main concern is the  threat of default if Washington’s warring politicians  fail to agree to extend the US’s borrowing limit by 17 October. Without an increase in the debt ceiling, the government could run out of cash to pay all its bills.

“There’s no debate that the seriousness of the US not paying its debts… is the most serious thing we have, and we witnessed that in August 2011 and you saw the ramifications: a slowdown in the economy,” said Bank of America chief executive Brian Moynihan echoing Blankfein’s comments.

Obama last night warned that Wall Street should be concerned that a faction of the Republican party is willing to allow the US to default on its debt.

“It is not unusual for Republicans and Democrats to disagree … but when you have a situation in which a faction is willing potentially to default on US government obligations then we are in trouble,” said Obama in an interview with CNBC.

“I am exasperated with the idea that unless I say that 20 million people, ‘you can’t have health insurance, they will not reopen the government.’ That is irresponsible,” added Obama.

Republican speaker of the House John Boehner met with Obama last night to discuss the impasse in Congress in what Boehner hoped would be the start of serious talks.

The shutdown will today enter its third day as America moves further towards the deadline to extend the US’s $16.7 trillion borrowing limit by 17 October.

Meanwhile the effects of the shutdown continued to be felt on the American economy.

Of the Dow, 20 companies closed lower, eight saw gains and two were unchanged.

United Technologies, a US defence contractor saw its share price fall two per cent after it warned that if the shutdown lasts until Monday 2,000 of its workers would be placed on leave as government inspectors are not available to audit and approve its manufacturing.

Obama yesterday cancelled a long-planned trip to Asia that he was due to leave for on Saturday as the stalemate in Congress looks ever less likely to be resolved before the weekend.