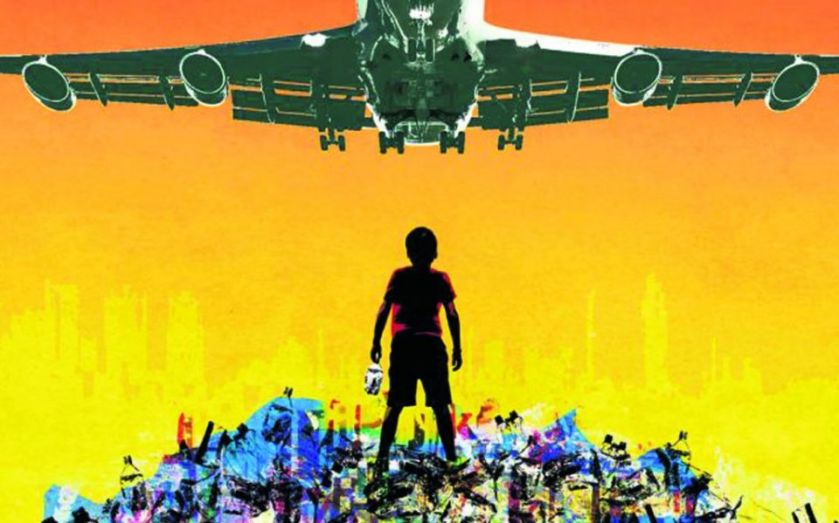 Olivier Theatre | ★★★☆☆
The dirtiest thing in the Annawadi slum is the language. Above the din of arriving and departing planes (Annawadi is located right next to Mumbai airport) millions of slum-dwellers bicker, joke and philosophise in words as colourful as the advertising hoardings above their heads. American author Katherine Boo depicted this world in her award-winning 2012 reportage Behind the Beautiful Forevers, a work that David Hare has now deftly distilled into an exemplary new play. The book was a wide-ranging dispatch from one of the most crowded  places on earth.
Reducing it to a two and a half-hour play is no mean feat. From a large cast of characters, two main narrative strands emerge. One involves a dispute between neighbours Zehrunisa (a brilliant Meera Syal) and “crippled” Fatima (an also brilliant Thusitha Jayasundera) that culminates in Fatima being set on fire and blaming Zehrusina’s family, leading to protracted court cases and a spell in prison for her son Abdul.
The other involves two teenage girls who meet in secret to give voice to their dreams of leaving the slum (it’s one of many cruel ironies that the slum dwellers are trapped in Annawadi while their livelihoods are completely at the mercy of the unfathomable tribulations of a distant place called “Wall Street”).
On the whole, the older generation have made peace with Annawadi’s daily trials. For the teenagers, though, the slum feels like a prison from which the only escape is prison. Or suicide. The latter is an especially tantalising prospect for the young girls educated enough to know there’s a world out there but wise enough to know they’ll never be able to reach it.
But Hare teases out another means of escape. Leaving prison, Abdul chooses to opt out of the industrialised thievery that provides many slum-dwellers with their livelihoods, thereby carving out a moral space amid the chaos.
Like Boo, Hare succeeds in portraying both the kinetic energy of Annawadi, and the three-dimensional humans living within it – an all-singing, all-dancing success.

Not about Heroes ★★★★☆
A moving account of the friendship between Wilfred Owen and Siegfried Sassoon at Trafalgar Studios 2
King Charles III ★★★★☆
This brilliantly written play explores what Britain will be like when Prince Charles is king. Wyndham's Theatre
John ★★★☆☆
An intense modern dance epic at the National’s Lyttelton Theatre isn’t for the faint-hearted