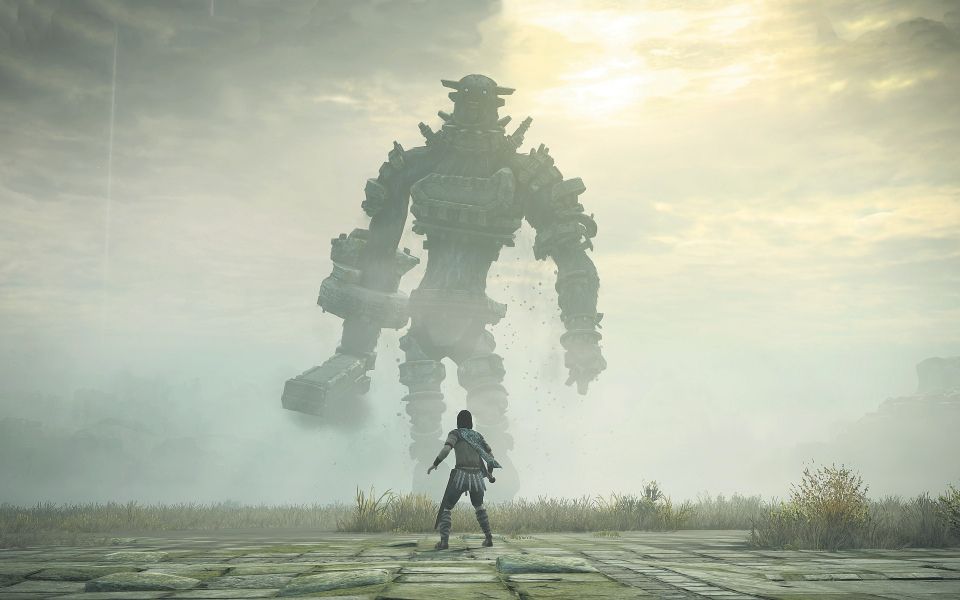 Shadow of the Colossus was a quiet epic, launched at a time when games were predominantly about things exploding loudly in your face.

In this minimalist and melancholic saga, you ride your faithful horse across a vast wilderness to track down and slay 16 enormous stone giants. The world, desolate and littered with the collapsed remains of some long-fallen civilisation, is soundtracked only by howling winds and the thud of your steed’s hooves. It is achingly bleak, like a sad painting in a wheelie bin, or a carrier bag snagged in a tree.

The dreamlike spectacle of the landscape contrasts with the violent encounters you bring to the roaming granite goliaths, who shamble over the horizon like drunk skyscrapers, their vast and lumbering forms inviting you to scale their limbs and plunge your sword into their glowing weak points. There are no collectibles, no weapons besides your sword and bow, and no objective beyond defeating each of the far-flung colossi in turn. Shadow of the Colossus is an exercise in ruthless subtraction, and designer Fumito Ueda chiselled out an enduring masterpiece.

The game was an instant classic in 2005. It chugged along on the already creaky specs of the PlayStation 2, its open vistas pushing the outmoded hardware to the absolute limits of its waning abilities. The game was then remastered on PlayStation 3 in 2011, with a smoother framerate and an increased resolution.

This PlayStation 4 version goes much further. Knowing that another spit-polish wouldn’t be enough to bridge the now two-console-generations wide gap, Texan developer Bluepoint Games instead remade Shadow of the Colossus from scratch, taking the original code as a framework and loading it up with all new high-fidelity graphics, textures, models and environments.

It was an ambitious undertaking, one befitting a game so beloved, but also one fraught with difficult design choices. The original is blemished by two main imperfections: woozy controls that make timed jumps a frustration, and an uncooperative camera. A decade later, are these faults now considered vital to the authentic restoration of the artwork? Or are they rough edges to be painted over? Would you fix the horizon on the Mona Lisa if you could? Maybe give her some eyebrows?

Bluepoint rightly decided to tighten up the controls (though perhaps not enough for modern tastes), while allowing the infamously wayward camera to continue doing its thing. This is not so bad, as you soon learn to let it point wherever it wants, and it rewards you with dramatic, swooping shots as you gallop across fields and valleys.

This remake is an act of preservation as much as it is a restoration, and the sacred cow is left unscathed, warts and all. Most crucially, the essence of the original game is unchanged. The cyclical, timeless rhythm of its grand and austere world is untouched. This is Shadow of the Colossus as the players remember it, gloriously brought to life by the most powerful GPU there is: rose-tinted spectacles.