“Sell in May and go away,” so the old stock market adage goes. The theory is that you should sell in summer months because they are usually the worst performing.

So investors should sell in May and hold cash until early September – until the St Leger horse race.

But data analysed by Schroders offers a mixed picture for the UK’s most famous stock market superstition.

Since 1986 the FTSE 100 has, on average, fallen a fraction between mid-May and mid-September. However, the FTSE 250 has typically risen.

Where does the “Sell in May” adage come from?

It was thought that traders would take more time out of the City for sporting events, such as Wimbledon, the Royal Regatta at Henley and Royal Ascot.

They would return in September after the St Leger horse race, when trading volumes, and demand for shares, would increase.

The table below shows the average performance of the UK’s three biggest markets over the past 31 summers.

The FTSE 250 offers the highest historic returns of 0.82% for the summer months, with marginal loses for the other two. If you take an average of all three indices, the rise has been marginally positive at +0.10%.

The summer period has also produced more positive years than negative ones. In the thirty one years since 1986, seventeen summers have produced a positive return.

The chart below shows the probability of UK markets falling for each month of the year. It combines the FTSE 100, FTSE 250 and the FTSE All Share to produce an average, since 1986. 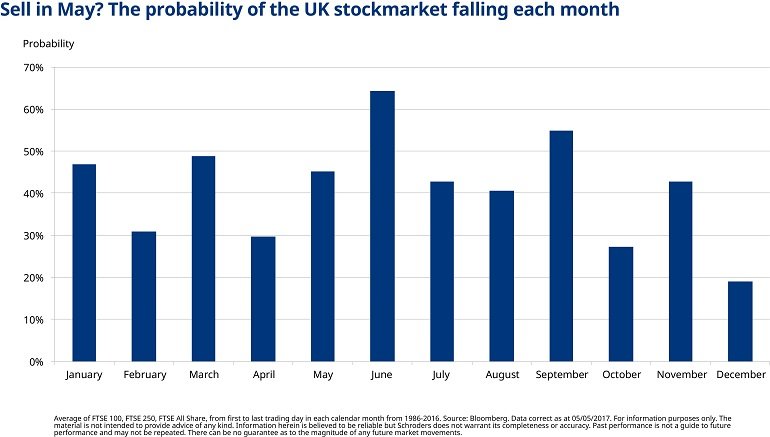 The summer months do seem to witness a fall more often than other months, although January and March also seem to struggle. However, with only two of the summer months above 50%, it’s difficult to draw meaningful conclusions.

The reality is that before the “Big Bang” of financial markets in 1987, when exchanges were far more localised, the effects of City workers leaving for social events and holidays could have had a material effect on returns.

Previous studies have found patterns. A paper published by the American Economic Review in 2002, “Feed a cold and starve a fever”, found certain European countries, such as the UK, showed evidence of the sell-in-May effect dating back as far as 1694.

A variety of theories have tried to explain these results. Apart from lower trading volumes, others thought the sell-in-May effect could be explained by the timing of the tax year and even general over-optimism among investors in the spring.

What about the future?

Forecasting markets is difficult enough let alone trying to identify seasonal or monthly patterns that may be repeated. As we know, past performance is no guide to the future.

We also know that modern markets are far more globalised while better technology keeps investors connected even if they are out of the office.

James Rainbow, Co-Head of UK Intermediary Business at Schroders, said: “You shouldn’t expect stock market history to repeat itself and you should certainly treat superstitions about the markets with a huge pinch of salt.

A separate Schroders study in Asia looked at the Halloween effect – from May to October, which is regarded as another period of underperformance. It found quite the reverse, except for Taiwan. The MSCI Taiwan index delivered a median return of -6.0% during those months.

Rainbow added: “Those looking to turn to cash this month and return in September again this year do so at their own risk. A far better approach is to think long-term. Make sure you have a clear investment plan and stick to it.”

To underline the point, Schroders analysed price data from the last ten years of the S&P 500*.

The return has been 65%. But if you take out the ten best trading days, the return is just 13%. Take the worst ten out and it is 72%. What these numbers don’t show is that the best and worst days are extremely close together.

Nine of those worst days occurred within ten weeks of each other. Eight of the best days were also in that same time period. Predicting when those days will occur is impossible.

Perhaps the St Leger Day wives' tail should be put to bed, in the UK at least. American economist Paul Samuelson said:

“Investing should be more like watching grass grow…if you want excitement, take $800 and go to Vegas.”

Invest for the long term – not just for one season – and give your investments the best chance to grow.