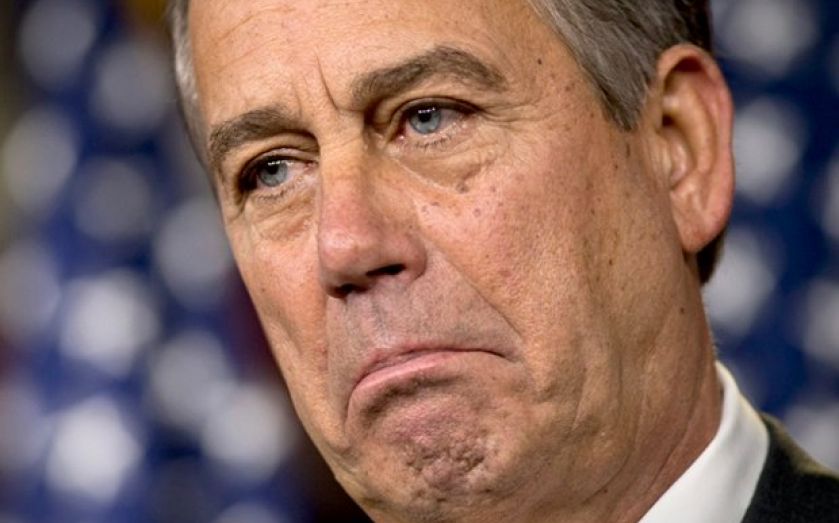 REPUBLICAN House Speaker John Boehner vowed yesterday not to raise the US debt ceiling without a “serious conversation” about what is driving the debt, while Democrats said it was irresponsible and reckless to raise the possibility of a US default.

“The nation’s credit is at risk because of the administration’s refusal to sit down and have a conversation,” Boehner told US broadcast ABC, adding that there were not enough votes in the House of Representatives to pass a “clean” debt limit bill, without any conditions attached.

Asked if that meant the United States was headed towards a default if President Barack Obama did not negotiate ahead of an October 17 deadline to raise the debt ceiling, Boehner said: “That’s the path we’re on.”

The comments appeared to mark a hardening since late last week when Boehner was reported to have told Republicans privately that he would work to avoid default, even if it meant relying on the votes of Democrats, as he did in August 2011.

Republicans and Democrats also traded blame for a shutdown that has brought much of the government to a standstill for nearly a week. With no end in sight, the battle over funding the government has merged into the one over the debt ceiling.

Republicans have demanded that Democrats agree to delay implementation of the Affordable Care Act, the landmark 2010 law popularly known as Obamacare, as part of any spending bill.

They have also been seeking measures to address the federal government's long-term debt in exchange for raising its $16.7 trillion debt limit. If the borrowing cap is not increased, the US could go into default, with what officials and economists say would be seriously damaging consequences for the US and global economies.

“I don’t want the United States to default on its debt,” Boehner said. “But I’m not going to raise the debt limit without a serious conversation about dealing with problems that are driving the debt up. It would be irresponsible of me to do this.”

Democrats vow not to negotiate on the funding bill or the debt ceiling, arguing that it is the job of Congress to pay its bills.

The party say bills to fund the government and raise the debt ceiling could be resolved quickly if Boehner permitted votes on simple, no-strings-attached measures in the Republican-controlled House.