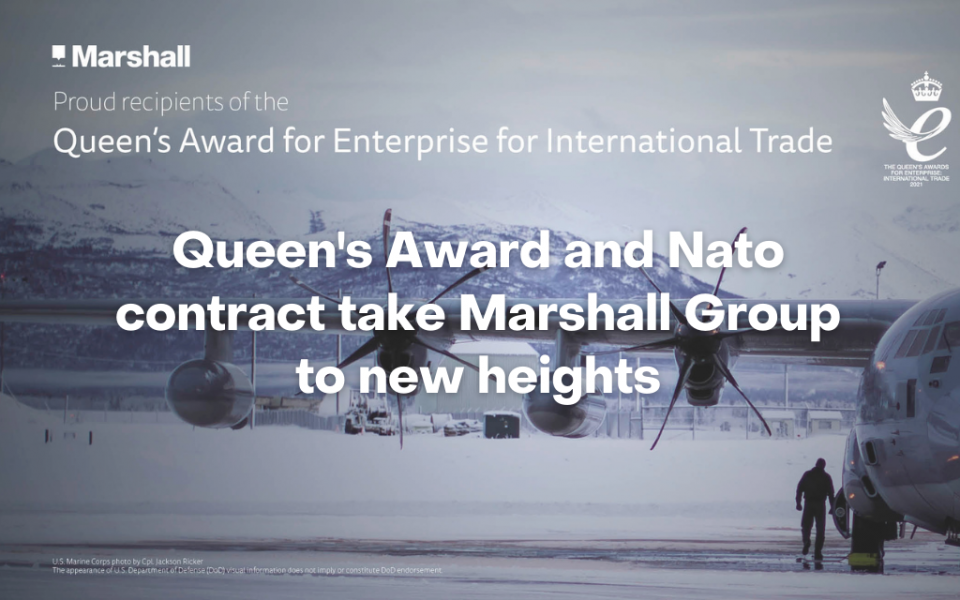 Just days before it was revealed that Marshall Aerospace and Defence Group had won a 2021 Queen’s Award for International Trade, the company announced that it had been awarded a contract by the NATO Communications and Information Agency for upgrades to their Deployable Air Command and Control Component’s systems.

Perhaps not unusual for a company that is the UK’s leading privately owned aerospace and defence business, but certainly a reflection of just how far ‘Marshalls of Cambridge’ has come since its establishment in 1909.

In that year David Gregory Marshall opened up a small lock up garage in the city providing chauffeur services. It now operates worldwide in the fields of aerospace, military land systems and fleet management from its 800-acre site in Cambridge with locations in Yorkshire, the Netherlands, UAE and Canada.

This year’s Queen’s Award recognition also marks a hattrick of such gongs, having previously been a recipient for International Trade in 2013 and for Innovation in 2016.

The award recognises the exponential growth in Marshall’s International C-130 customer base which now sees the business support 17 global operators enabling the business to deliver export sales in excess of £162m over the three year period between January 2017-December 2019, contributing to a 48 per cent increase in export revenue over the five year period 2015-20.

It is impressive stuff for a company of humble beginnings which has now delivered critical sovereign services to UK defence since the start of World War II.

Gary Moynehan, Marshall Aerospace and Defence Chief Executive, said: “Our business has been synonymous with the RAF for many years and while we have a number of other European C-130 customers who have been with us for decades we have been very much focussed over the past five years on growing our international portfolio.

“This has resulted in us winning significant new business in Africa, the Middle East and North America, notably the US Marine Corps, who awarded us a 10-year enablement contract to deliver scheduled and unscheduled maintenance across its 66-strong fleet of KC130J aircraft last year.

“At the same time as growing our own business, we have also been able to work in partnership with the Ministry of Defence to support the resale of RAF C-130J aircraft to countries including Austria, Bahrain and Bangladesh, adding significant value to the UK economy, and will continue this work as the UK fleet size is further reduced.

“We are absolutely delighted to be a recipient of this very prestigious award in recognition of the work that our Military Aerospace business has done to establish itself as the global leader in C-130 maintenance and support.”

Marshall Aerospace has been involved with all levels of aircraft maintenance, modification and conversion since it established its airfield in 1937 and the future remains bright.

Since 1998, the Group’s technical training department has provided systems training to all levels of engineering, with various training programmes available for people of all ages, from apprenticeships and graduate schemes, through to Adult Re-training programmes.

They currently have 150 active learners following in excess of 20,000 who have been trained over the last 100 years, ensuring that Marshall will continue to fly high.

to find out more visit: www.marshallgroup.co.uk