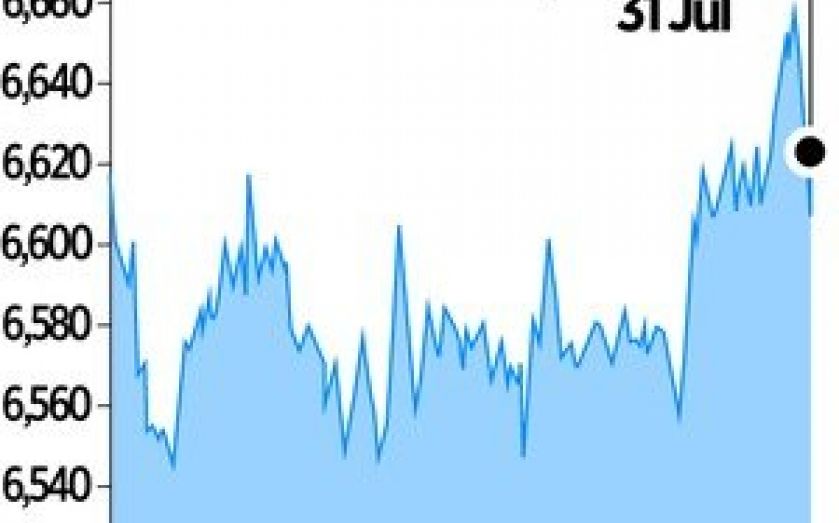 THE FTSE 100 rallied yesterday as the quickening pace of the global economy’s heartbeat revived confidence that economic recovery can be sustained even if stimulus is withdrawn.

Economic growth in the US unexpectedly accelerated in the second quarter, with gross domestic product growing at a 1.7 per cent annual rate, stepping up from the first-quarter’s downwardly revised 1.1 per cent expansion pace.

“It is not a barn-storming reading by any stretch of the imagination, but shows further momentum in the world’s biggest economy,” said Marcus Bullus, trading director at MB Capital.

“However GDP is measured, such a strong number sent an instant buy signal to the markets,” he said.

Heavyweight stocks led the charge on London’s blue chip index, which closed up 50.11 points or 0.8 per cent at 6,621.06, although off the session high of 6,65.35 with the Federal Reserve’s post-policy meeting announcement due after the London market closed.

“I am now selling on the bounces,” Ed Woolfitt, head of trading at Galvan, said. “Technically, it feels a correction is brewing up.”

Energy shares, which are acutely exposed to the fortunes of the broader economy, contributed 10.6 points to the index’s gains, with oil major BP up 0.7 per cent boosted by upbeat comment from BofA Merrill Lynch and JP Morgan post-results.

Although the economic recovery in Europe and the UK is still lagging, there have been signs of life in the data in recent weeks, which has given some fund managers more confidence.

“This is a theme we have been playing in portfolios since the beginning of this year; adding companies which have high exposure to Europe and should benefit from any improvement in GDP growth,” Andrew Arbuthnott, head of European large cap equities at Pioneer Investments, said.

“Q2 earnings to date have been lacklustre at best but we believe the market is really looking through these numbers and expecting an improvement in quarters to come,” he said.

Although only a small sample size, 75 per cent of UK-listed companies have either beaten or met expectations in the current quarter, compared with just 52 per cent of European companies.

Diageo rose 3.2 per cent after posting an eight per cent rise in annual operating profit.

Oil explorer Tullow climbed 1.1 per cent after a successful drill at its Etuko-1 well in Kenya.