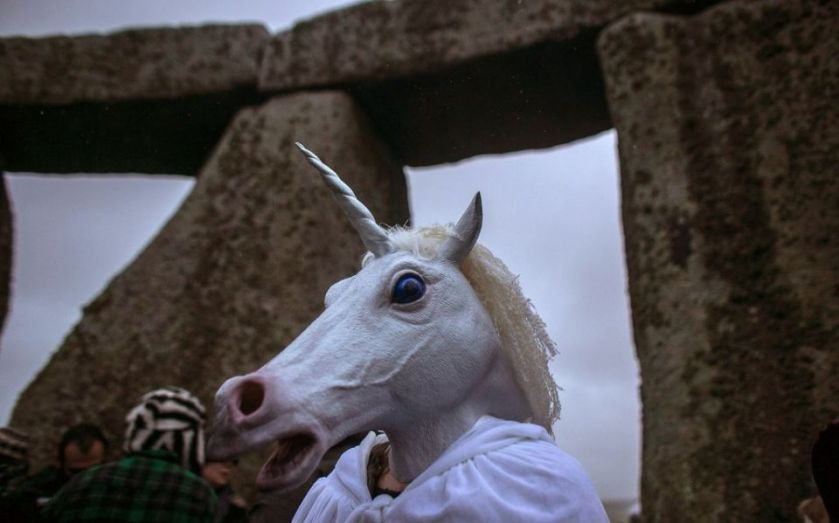 This year has been dubbed the Year of the Unicorn. It’s not an allusion to the success of the Scottish National Party – the unicorn being the national symbol of Scotland – but rather a reference to the booming global startup scene.
In the world of venture capital, “unicorn” is applied to young tech startups reaching a billion-dollar valuation and it was originally intended to capture the legendary nature of such entities. In the few years since the term was coined by Aileen Lee of Cowboy Ventures, however, unicorns have proved decidedly non-mythical. In fact, they’ve bred like rabbits: while there were just four such companies in 2009, there are some 143 at the time of writing, according to CB Insights, with a new one appearing every few days.
The unicorn’s now-prosaic nature has even led some to suggest a new buzzword for the truly rare beasts: the “decacorn”, for those valued at over $10bn. Already, though, multiple specimens may be found, including Airbnb, Dropbox, Pinterest, Snapchat, Uber and WhatsApp, leading to whisperings about the first “hectocorn”.
Read more: Building a tech unicorn could see you swimming with sharks
Scottish heraldry notwithstanding, unicorns are most commonly found in Silicon Valley. However, they are breeding in Europe too, with a huge increase in numbers since 2013. GP Bullhound counts more than 40 European specimens, such as Spotify, BlaBlaCar and Funding Circle. And the UK is leading this trend.
Part of the story is, of course, about valuations, some of which may well be unsustainable. As has been pointed out to me, Facebook is now worth more than the combined market cap of Germany’s “Big Three” car manufacturers, and a number of other tech companies seem a little frothy to me. I expect that a few unicorns will prove illusory after all.
Yet that is not the whole story. The past few years have seen a genuine increase in levels of entrepreneurship and in entrepreneurship support, with Global Entrepreneurship Week, taking place this week, hoping to inspire many more to explore their potential as self-starters and innovators.
In the UK, new company registrations are at an all-time high. Student entrepreneurship has doubled in the past four years. Corporates are, more than ever, seeking to incorporate startups in their innovation strategies. Accelerator programmes are appearing with such frequency that it is difficult to keep track.
The UK is also leading the way internationally in crowdfunding, which has the potential to be a great boon for startups. Thanks to a relaxed regulatory approach, the industry is booming here – Nesta’s research revealed that equity crowdfunding grew over 400 per cent last year – and has rapidly progressed beyond seed funding into multi-million pound rounds.
Read more: Is this the UK's next FinTech unicorn?
While this activity is certainly not confined to London, the capital does offer a particularly attractive environment both for startups and “scale-ups”, as evidenced in Nesta’s recent European Digital City Index. But there’s certainly more that can be done to create the right environment for these businesses to flourish, and that means taking into account both policy and the city’s ecology.
In comparison with many other European cities, in London, the administrative barriers to new company formation are low. The city has a very well-developed venture capital industry. Startup support, such as accelerators and mentoring, is pretty easy to find, as are co-working spaces. London also boasts multiple world-class universities, such as Imperial, UCL, LSE and Kings, which attract talent and create numerous knowledge spillovers.
Culturally, too, we have a highly positive attitude towards entrepreneurship, as measured by things like our willingness to take on risk and our perception of founders. In Britain, we tend to view entrepreneurs as fashionable leaders, in marked contrast to some other countries where entrepreneurship is seen as the last resort for those unable to secure employment.
But there are downsides to starting and scaling in London. The most glaring is cost. Office rental prices, the cost of skilled labour and the general cost of living in London are the worst of any major city in Europe. Despite occasional depictions of young founders flush with cash, most startups live hand-to-mouth. While London is a good place to raise funds, it also drains those funds much more quickly.
This, of course, is hardly news to those of us living and working in the City, but we must take it seriously if we want London to remain an attractive place for startups. In the short term, extending small business rate relief to co-working spaces, incubators and accelerators may help. In the longer term, we need to increase the supply of commercial property available at reasonable prices and on flexible terms. We need migration policy to strike a thoughtful balance, too: while firms benefit from an inflow of highly-skilled labour, both from outside the UK and from within, migration is undoubtedly also a significant factor pushing up prices.
We should also do more to shout about our homegrown startups and scale-ups among overseas VCs. US equivalents still benefit from better access to the capital they crave, meaning we risk many of our bright ideas pitching up across the Atlantic in search of easier fundraising and higher valuations. Research shows US startups have received almost 10 times as much funding as those across the whole of Europe this year. We must retain these businesses, not only for their important economic contribution but also for the wider impact they have on innovation and society. These companies will prove to be mentors and role models for the next generation of entrepreneurs.
Share: