Insurers such as Just Retirement have escaped a potentially devastating blow to their earning power thanks to a regulatory re-think over new capital requirements.

The Bank of England’s prudential regulation authority (PRA) had been considering rules that may have forced them to abandon the highly lucrative equity release mortgage (ERM) market.
Industry sources last night told City A.M. that a stark warning over ERMs from the Bank of England’s prudential regulation authority (PRA) in October caused uproar in the market. “People had their heads in their hands, fearing one-third of their assets might not be eligible for capital purposes,” said one sector specialist.
“Insurers have been through desperate times trying to resolve the issue. Many think the equity release industry has been close to being killed.”
Firms in the sector, particularly Just Retirement, have already had a rollercoaster ride in the last year since George Osborne unveiled dramatic reforms of the pensions market nearly a year ago. Shares in Just Retirement sank 42 per cent in the hours that followed last year’s Budget. 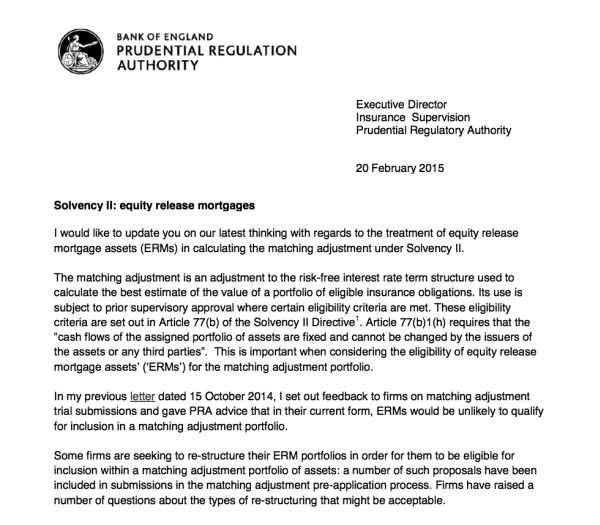 Partnership Assurance is also heavily involved in the ERM sub-sector, while LV reported 13 per cent growth in its ERM book in 2014. Legal & General entered the market just last month with the acquisition of New Life Home Finance for £5m. “Going forward we believe an increasing number of people will access their housing wealth to help provide extra retirement income,” Legal & General said at the time.
The PRA wrote to insurers last year about the capital requirements that are being brought in under Solvency II. The new European legislation, which comes into force in 2016, requires insurers to be capable of covering all their expected future insurance or reinsurance liabilities.
In order to help firms meet this heightened capital requirement, policymakers have proposed a so-called matching adjustment which will reflect the degree to which an insurer is protected against credit spread volatility – in other words, shocks to the market. However, in order to qualify for this matching adjustment, cashflows coming from an asset must be fixed.
This causes a problem for those dealing in the equity release market – ERMs allow individuals aged 55 and over to release money from their homes but the timing of repayment of such mortgages is uncertain, being dependent on when the policyholder dies, or whether they need to redeem the policy early.
The PRA told firms that ERMs were “unlikely to qualify for inclusion in a matching adjustment portfolio”. The watchdog said features common to most ERMs, “such as cash flows that depend on longevity, morbidity, and the realisable value of property, and exposure to prepayment risk” would make those assets “very unlikely to be compatible with the eligibility criteria” – potentially meaning that they would have to be scrapped or sold off. Insurers have been trying to find a solution that will allow them to qualify for the matching adjustment, one such being to spin off their ERM portfolios into wholly owned subsidiaries. In a recent update to the market, the PRA conceded this may be an acceptable answer to the problem.