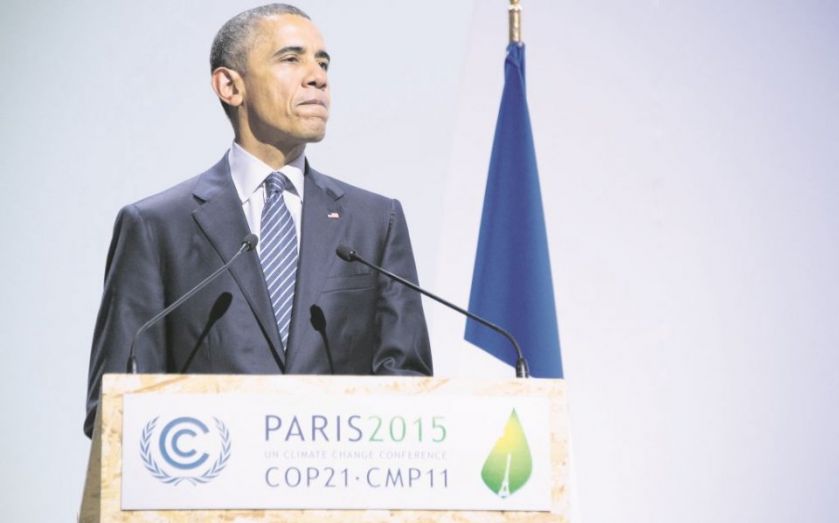 As global leaders meet this week in Paris at the United Nations climate conference, there’s only one industry welcoming the prospect of greater regulation – the firms which help people comply with the rules.
This latest round of climate talks, known as COP21, involves 160 countries debating ways to tackle climate change. While the outcome of the previous meeting in Copenhagen in 2009 was disappointing, this time world leaders have come armed with commitments.
“What’s different this time around is the willingness to cut emissions shown by key countries. The majority of participants have already announced their pledges to lower greenhouse gas emissions over the next 10 to 15 years, setting the stage for constructive global talks,” says Roberto Cominotto at GAM.
Even aside from the climate talks, environmental legislation has been on the rise, and the trend is only going one way.
Regulation is the bane of every industry – except the environmental sector. Companies which make the technology to help homeowners, manufacturers and other businesses hit legal targets are thriving. The prospects for these companies tend to improve as regulatory requirements grow.

Jon Forster, a fund manager at Impax Asset Management, actively looks for companies in areas where regulation is tough, and getting tougher.
He says the next area of opportunity will be the automotive sector. In the wake of the Volkswagen scandal, where the car manufacturer admitted to fitting vehicles with “defeat devices” to cheat emissions tests, the industry is set to face greater scrutiny. “This is likely to lead to more regulation for the automotive industry which will benefit environmental consultancies and companies involved in the testing and monitoring of auto emissions. Over the longer term, companies manufacturing catalyst and filtration systems have solid growth prospects,” Forster says.
Experts are tipping environmental consultants Ricardo, as well as Horiba, which conducts emissions tests, and Johnson Matthey, which makes engine autocatalysts, as firms which could benefit. “Emissions standards, particularly for diesel engines, and tests for vehicles are going to get tighter,” says Charlie Thomas of Jupiter Fund Management. “There is going to be a greater focus on emissions.”

But the part of the world set to see the biggest change in environmental regulation is China. Officials are waking up to the fact that the country’s horrific pollution levels are not just a public health issue but are actually holding back business. Some parts of the country have air pollution that is among the worst in the world, while there are areas where people struggle to find clean water.
Workers battling health problems from pollution are a hindrance to productivity. “There is real political will to combat the country’s severe environmental problems,” Forster says. “This will benefit both Chinese domestic companies but also global companies in the renewable energy, water and pollution control businesses.”
Authorities have announced plans to spend $330bn on cleaning up the nation’s water supplies, while China also has targets for expanding solar and wind power.
“Despite the fact that we are seeing a slowdown in China’s GDP growth, we don’t think that’s going to have a significant impact on companies which are providing solutions to those challenges,” Thomas says. Given the country’s equity markets have been out of favour with investors since the sell-off this summer, there are interesting valuation opportunities, he adds. Fund managers frequently cite Boer Power, Goldwind Global, SunPower and First Solar as companies with good and improving prospects in the renewables and energy efficiency sectors around the world.
“China remains the clear leader in renewable installations and there are attractive investment opportunities, especially in the solar industry, for companies with the potential to gain market share in Asia, such as Canadian Solar, JinkoSolar and SunPower,” says GAM’s Cominotto. “We also like Boer Power, a Chinese producer of equipment for electric power grids; one of the bottlenecks for renewables expansion globally.”

$330bn – the amount China will spend on tackling water pollution.
$1bn – the donation France will make to emerging markets to combat climate change.
$5.8bn –the UK’s pledge to the International Climate Fund up to 2021.
€20bn –the amount Germany has been spending on rewewable energy subsidies each year, up from €8.2bn in 2010, according to energy and water industry association BDEW.