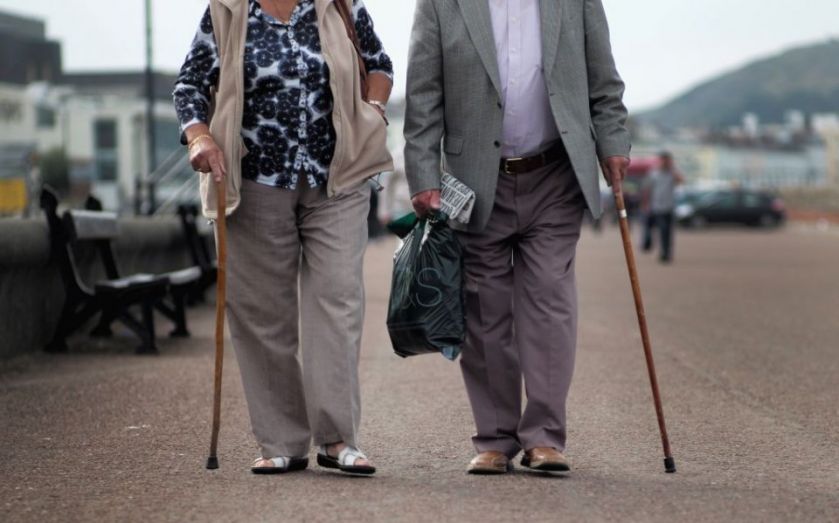 Pension schemes represent a  “material risk” for many of the largest companies in the FTSE 100, new research shows.
Six firms, including BAE Systems, British Airways-owner International Airlines Group, RSA and Royal Bank of Scotland, all have total disclosed pension liabilities almost double their equity market value, so says JLT  Employee Benefits’ quarterly report on the FTSE 100 and their pension disclosures, out today.
The other firms JLT listed as having the most significant pension scheme liabilities are Sainsbury’s, BT, Barclays, Marks & Spencer, Morrison Supermarkets and Smiths Group.
Read more: A pensions perfect storm is brewing – but longer lives needn’t prove a nightmare
The total deficit in FTSE 100 pension schemes had reached £89bn at 31 March, a deterioration of £30bn from 12 months earlier.
Total disclosed pension liabilities among FTSE 100 firms rose from £557bn to £615bn and sponsor contributions fell from £14.6bn to £13.7bn.
Meanwhile, FTSE 100 defined benefit pension schemes have increased their asset allocation to bonds from an average of 55 per cent to 60 per cent during the period, as companies try to reduce investment risk and move towards liability driven  investments (LDI) strategies.
“Bonds, and LDI strategies in particular, have outperformed equities in the last year or so, which has naturally led to an increase in bond holdings,” said Charles Cowling,  director at JLT Employee Benefits.
“As LDI becomes more of a norm, so bond allocations will increase.”
Read more: UK company pension deficits could not be plugged by annual salary of every UK employee
He said average bond holdings among pension schemes could be up to 70 per cent within five years, and 90 per cent within 10 years.
Cowling added that, for many  companies, “the only thing that stops them” from moving towards bonds is a large deficit or lack of funding commitment, “which spurs them to keep investment risk in the hope for higher returns”.
“As and when deficits eventually reduce, the barriers to switching into bonds will largely disappear,” he said.
Share:
Tags: BAE Systems Barclays BT Group Company FTSE 100 Marks & Spencer Group Pensions Royal Bank of Scotland Group RSA Insurance Group Sainsbury (J)