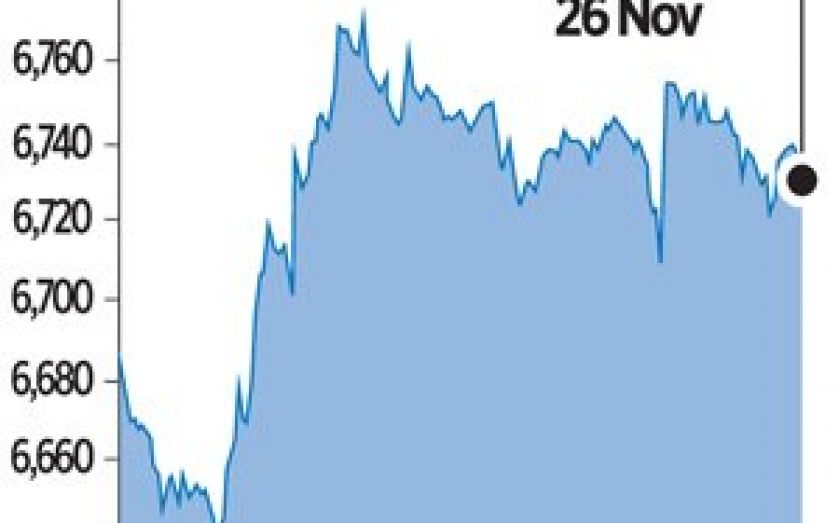 The blue chip FTSE 100 index ended 1.97 points lower, or flat in percentage terms, at 6,729.17 points after hitting a session high of 6,765.01 in early trading, as losses in travel stocks were offset by gains in some other sectors.

The UK Travel and Leisure index fell 1.3 per cent, the biggest sectoral decliner, with mid-cap Thomas Cook slumping 17.7 per cent 113.50p, after saying its chief executive Harriet Green was stepping down just as the company warned of tougher trading conditions next year. TUI Travel, down 2.1 per cent to 417.50p, was the top faller in the FTSE 100 index, with traders citing a knock-on effect from sector rival Thomas Cook.

This quarter’s slide in mining share prices has exceeded a concurrent fall in base metals prices. While the sector is 2.9 per cent lower this quarter, copper is down just 1.4 per cent over the same period.

BT closed 2.17 per cent higher at 404.40p as EE confirmed it was the other company involved in talks about a mobile deal – in addition to O2.

Fruit Shoot maker Britvic slumped 5.96 per cent to 655p after it said competition among retailers would put pressure on its prices in the coming year and lead to subdued revenue growth.

Flybe dipped 0.98 per cent to 100.75p despite the company signing a deal to fly services for Scandinavian airline SAS.

Insetco, up 280 per cent to 29p, has signed an agreement with Quantus Income Opportunities and Melken Group to provide services in con­nec­tion with their joint development of a portfolio of senior life settlement policies.