GOVERNMENT statistics substantially understate the importance of digital businesses to the UK economy, according to an analysis released yesterday.

A report by the National Institute of Economic and Social Research found there are at least 270,000 digital companies in Britain, well above the government’s recent estimate of 120,000.

Under its most optimistic analysis, produced by studying more than five billion data points, the researchers concluded that there may be up to 470,000 digital companies in Britain.

The report also found that digital businesses tend to grow as much as 25 per cent faster than their non-digital equivalents, as well as employing an average of three extra people. 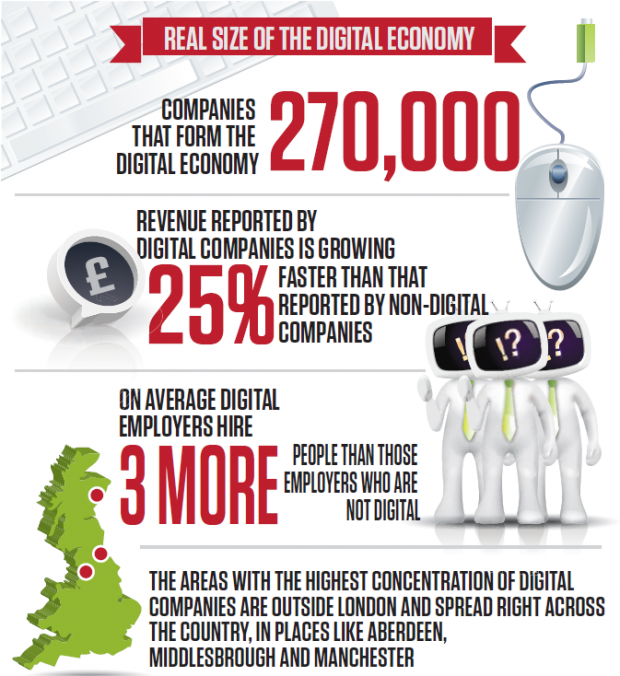 “The myth persists that [the digital economy] consists largely of tiny dotcom or biotech startups in a few high technology clusters,” the report says.

Instead, the report says that firms that provide traditional services such as technical drawing and machine-tool manufacturing should be considered digital firms, since the majority of their work is carried out on computers.

The report blame the discrepancy on the UK’s reliance on the Standard Industrial Classification codes drawn up in 1948 to classify all businesses. It says these are inappropriate for the modern world and understate the importance of digital companies.

Tom Gatten, chief executive of Growth Intelligence, who provided the data, said: “This research demonstrates the need for a new way of understanding the economy, both for government and for businesses.”

Under his company’s definitions the number of British jobs in the digital sector rises from five to 11 per cent, with many of these in non-traditional technology areas such as Aberdeen and Middlesbrough.