Death of England review: Rafe Spall dazzles in this timely portrait of the resurgent far-right 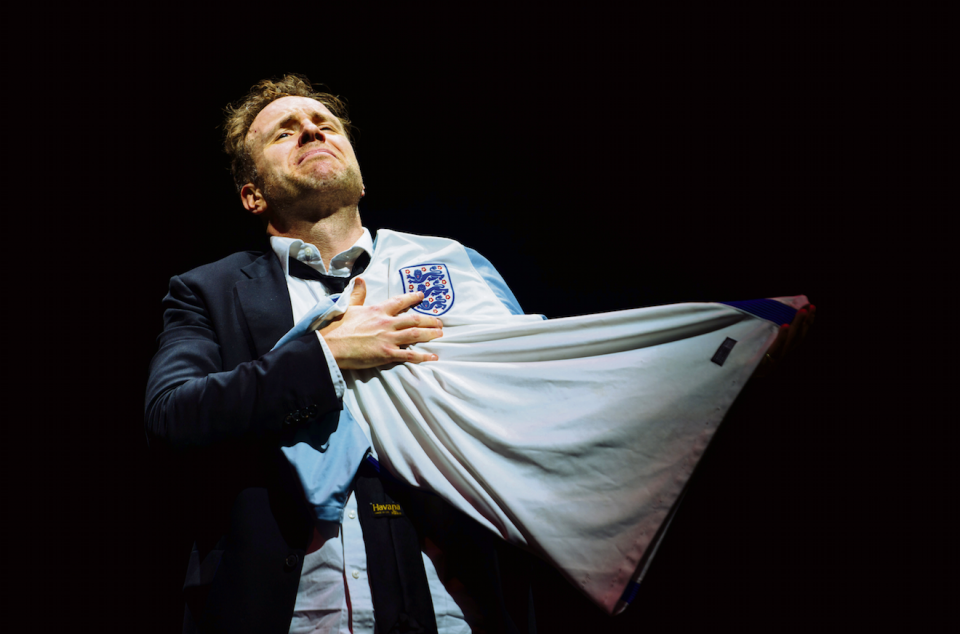 Rafe Spall asserts his credentials as one of the finest stage actors around in this percussive, often hilarious one-man play about working class racism.

He plays Michael, an Essex flower-seller whose oily patter masks a vast well of toxic emotion. He’s the guy in the pub who’s all smiles until he’s kicking the life out of some poor sod who spilled his beer.

Michael’s inability to deal with his feelings is brilliantly captured by Spall. After his dad dies during an England match, for instance, Michael plays out his coke- and gin-fuelled inner monologue as it screams “Don’t you dare cry”. You can almost smell the raw, unprocessed grief.

Read more: Steve McQueen at Tate Modern review: Dramatic retrospective muses on what it means to be human

Despite being a lost boy and chronic underachiever, Michael is one hell of a story-teller, charismatic and likeable despite your better judgement. He acts out scenes from his life, jumping from time to time, character to character, with his casual racism only gradually drip-fed to the audience.

Spall doesn’t just read his lines – he interacts with the audience with the easy grace of a stand-up comedian, getting the crowd on-side before gut-punching them with his bigotry.

This bigotry, we learn, has been passed down from his father, the family patriarch who wanted nothing more than to “take our country back from the blacks”. Michael, a weak man, is racist through osmosis as much as choice. He wants to impress his old man, but he also wants to hang out with his black school-mates, and these conflicting ideas are simply popped into separate pigeon holes in his chaotic mind.

Clint Dyer becomes the first black man to have written, directed and performed at the National (Death of England is co-written with Roy Williams), and the fact his play is an examination of white working class identity feels mildly revolutionary, despite authors from Harper Lee to David Simon doing the inverse without anyone batting an eyelid.

In fact, perhaps the biggest criticism of Death of England is that Williams and Dyer are too sympathetic to their racist characters. While most of the play is an unflinching portrait of violence and bigotry, the final act veers into such contrasting territory that it feels almost magical realist, like a strange spell has been cast over the play, giving its characters a chance at redemption they don’t deserve. “Racism’s complicated” it seems to say, which while no doubt true, is a little unsatisfying.

Still, it never threatens to overshadow the explosive power of their play, a timely portrait of the resurgent far-right that’s elevated to dizzying heights by one of the most impressive solo performances in years.