Last month, the Financial Times highlighted two “remarkable and unexpected” features of the post-Brexit UK economy – consumer spending accelerated in the second half of last year and much of this was financed by a surge in borrowing.

According to the Bank of England, the article continued, consumer credit grew at an annual rate of almost 11% in November – the highest growth rate since 2005.

This appears to have caused the UK’s central bank to cease talk of another cut in interest rates and the FT goes on to quote the Bank’s chief economist Andy Haldane – “in defensive mode” – saying there was no need to be “too alarmist” about credit growth rates just yet. Among other things, he argued, interest rates were low – meaning household debt was more affordable than in the past – and also widely expected to remain so.

On The Value Perspective blog, we could offer you a few thoughts on why such a view is not quite as reassuring as it may at first sound – indeed we already have in articles such as Home truths.

Instead, however, we are going to focus in on a worrying line of argument proposed by the FT itself as to why we should not be growing unduly bothered about the rise in consumer credit.

“Consumer credit growth conveys the impression of people racking up debt on credit and store cards, leaving them exposed when repayments become due,” it said. “The vast majority of consumer credit is different, however because it relates to car finance, which is backed by an asset and …” Nooo – as we argued ourselves in Crash course, borrowing is a very bad idea when it is done against a depreciating asset … such as a car.

“One obvious issue here is not only are these finance providers seemingly happy to lend to people who cannot afford it, they are seemingly happy to do so using a depreciating asset as security,” we wrote. “At least with a house, a lender could – on a long-term view – reasonably assume its price would rise. In the sub-prime crisis, of course, prices fell but it was still a better bet than with an asset that always depreciates.”

As it happens, the Bank of England has itself written an article on Car finance, which examines how new car purchases these days are mostly financed by manufacturers’ own finance houses.

It argues this risks exacerbating the cyclicality of new car sales and, moreover, “manufacturers increasingly bear the risk of future falls in car prices, potentially making the industry even more vulnerable to macroeconomic shocks”.

One of the big issues with car financing is the reliance the whole system places on the value of second-hand cars. As soon as this value drops, it means somebody is missing out and – whether that is the car-financing company or the person who has purchased the car – that means there is a serious level of fragility built into the system.

The value of advances for car loans is currently growing at 13% for new cars and 8% for used ones while, as the following chart shows, car finance makes up a significant percentage of consumer lending growth. Is it “alarmist” to highlight this situation? On The Value Perspective’s dashboard, this particular warning light certainly appears to be flashing most insistently. 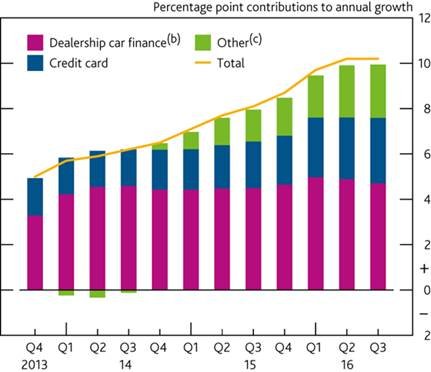