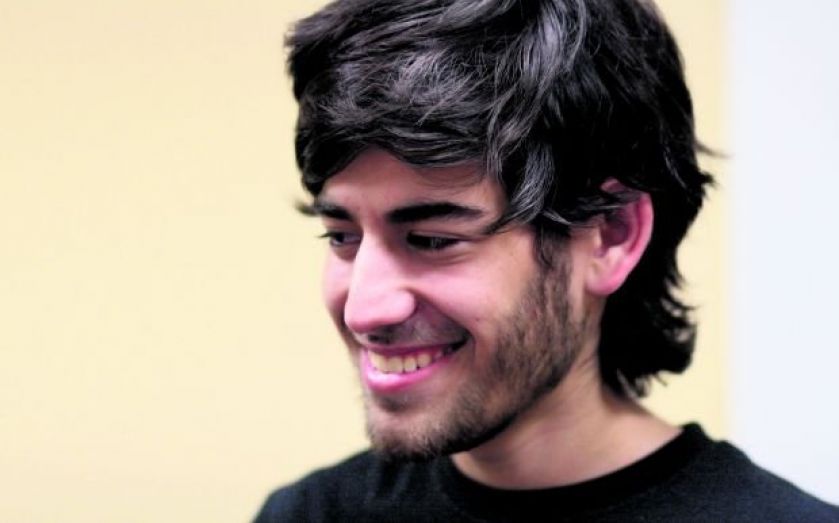 "He was the internet’s own boy and the old world killed him”. This eloquent epitaph is provided by journalist Quinn Norton, an ex-girlfriend of Aaron Swartz and one of many who talk tearfully of Swartz in a documentary, The Internet’s Own Boy, released this weekend. Swartz was indeed the internet’s boy but it was his belief that the internet belongs to everyone that led him into a battle with the federal courts, a battle that resulted in his suicide early last year.

Born in 1986, Aaron Swartz taught himself to read aged three. He did well at school, but hated education, finding syllabuses pointless and restrictive, and in his teens he dropped out to concentrate on programming. Instead of a group of friends his age he had a network of coders with whom he interacted and built programmes over the web.

When he was 14 he co-designed RSS Standard (the widely used system used to give live updates from websites to computers) and at 16 he helped Harvard law professor Lawrence Lessig (pictured below, right) do the programming for Creative Commons, a new form of intellectual property for the internet age.

At 18 he enrolled at Stamford University but dropped out because he “didn’t find it an intellectual atmosphere”. It was around this time that he joined forces with two guys working on a website called Reddit. His modifications helped turn the social news website into a company that Conde Nast, owners of Wired magazine, bought for an estimated $10-20m in 2006.

Swartz was an Einstein-like prodigy whom monocled leaders-of-the-field treated with awestruck deference. But instead of cashing in and becoming a captain of industry, he began campaigning. After gaining experience in Washington working for a Democrat congressional aid, he founded Demand Progress, a non-profit organisation that drove the successful anti-censorship campaign against SOPA, an astonishing victory given the big money lobbyists behind the bill.

Swartz’s obsession with the freedom of information movement is directly linked to his intellectual curiosity, a curiosity public libraries couldn’t gratify. “It’s called stealing or piracy,” he said in a manifesto he wrote as a teenager, “as if sharing a wealth of knowledge were the moral equivalent of plundering a ship and murdering its crew. But sharing isn’t immoral, it’s a moral imperative. Only those blinded by greed would refuse to let a friend make a copy.” Swartz wanted access to everything, and the denial of access – be it because of copyright laws or subscription fees charged by websites like JSTOR – made him mad.

And when something made Swartz mad, he did something about it. In the same way that he sought to improve and modify our global communications networks, he took a pragmatic approach to righting the wrongs he perceived in society. Swartz embodied a rare combination of pragmatism and idealism that made him a supremely effective campaigner and often landed him in trouble with the law. His first brush came in 2008 when he developed a programme to download 20m legal documents (which should be publicly available, according to the United States constitution) from US government website, PACER. The FBI visited his home, which spooked him, but a few years later he was at it again, this time targeting academic journal subscription services for hoarding scholarly material he thought should be public.

While working as a fellow at the Edmond J. Safra Center for Ethics at Harvard, Swartz entered the Massachusetts Institute of Technology and downloaded 4.8m articles onto a hard-drive. He was captured on CCTV and arrested on charges of breaking and entering with intent to commit a felony. Later, JSTOR dropped the charges, but federal prosecutors continued to pursue the case. After rejecting a plea bargain (that would have branded him a felon his entire life, thus preventing him from ever working in the White House, an ambition he harboured) he found himself up against a number of charges, punishment for which was up to 35 years in jail and a $1m fine. On January 11, a month before the trial was due to start, Swartz committed suicide in his Brooklyn apartment at the age of 26.

Why did he end his life? Like many geniuses, Swartz’s super-advanced intellect was counterbalanced by a dysfunctional emotional life. He was uncompromisingly principled and friends say this led him to judge himself and others harshly. He also hinted that he’d battled depression in past writings. Whatever his mental state, for someone who lived, breathed and campaigned for liberty their entire life, the prospect of 35 years in prison is no joke.

If it seems harsh that the US government pursued charges even after JSTOR and MIT had dropped them, it should be remembered that Swartz committed the crime at the worst possible time. It was the aftermath of WikiLeaks, a time when massive establishment institutions were intensely paranoid about lone super-nerds, the masters of a world they didn’t understand. This was a year that saw a crack-down on the activity of hacktivists and hackers the world over. If 2011 (the year of the Arab Spring) was the year the internet gathered revolutionary momentum, 2012 was when the establishment kicked back. Hard.

The residual feeling among those who knew, loved and admired Swartz is that the powers that be ruthlessly made an example of a vulnerable boy who only wanted to make the world a better place. The sad thing is, while many people have a similar desire, Swartz’s genius meant he was uniquely positioned to follow through on his vision. He is missed not only because of who he was, but because of how much he had to give.

The Internet’s Own Boy: The Story of Aaron Swartz is showing in selected cinemas from Friday