Blighty rose one place from last year in the rankings, published by the World Economic Forum (WEF), while Switzerland came top of the list and Finland (fourth) and Germany (fifth) both dropped a place.

The WEF praised the UK, along with Japan and the US, for "extraordinary and bold" monetary policies, adding that the British economy benefitted from "gains in lower levels of fiscal defecit and public debt".

We also have the fifth-most efficient labour market and the 15th-highest level of financial development. Although entrepreneurs tend to point out business growth is still stymied by red tape, the report also suggested we have a generally strong business environment – despite the fact that the UK is only 82nd out of the 144 countries when it comes to access to loans.

And while, contrasted with whizzy countries like Japan and South Korea where free wifi is plentiful (even on the tube), the UK might not seem like the most tech-savvy nation, the WEF said we are the second-most "technologically ready" country, beaten only by Luxembourg.

"The country benefits from an ICT uptake that is one of the highest in the world – and that, coupled with a highly competitive and large market, allows for highly sophisticated an innovative businesses to spring up and develop," said the WEF. Get us. 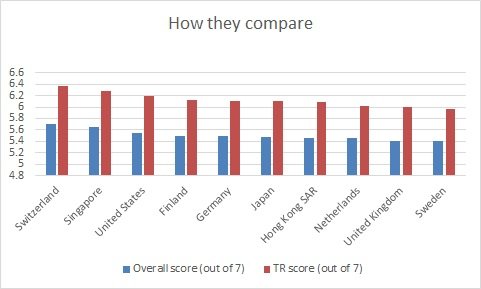