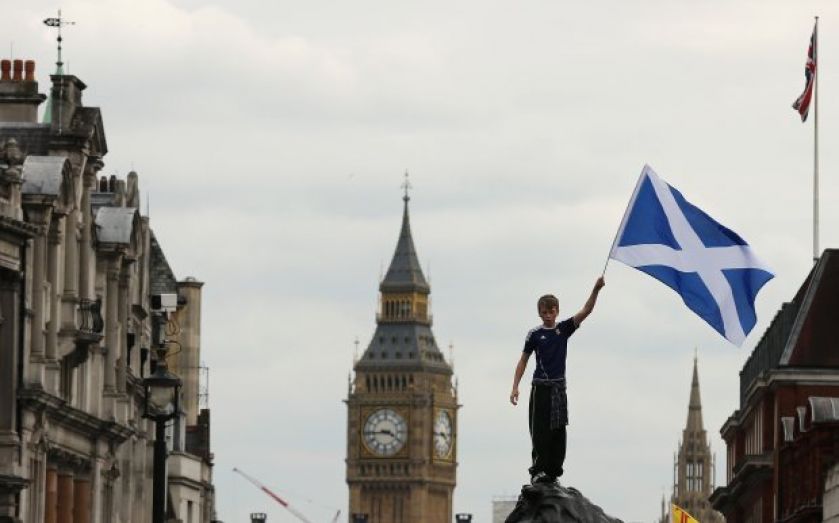 In all their discussions with investors, "the topic of Scotland's independence referendum (if it is mentioned at all) is generally not treated seriously".

Globally, the media has treated the referendum as a light entertainment story, and Google data suggests that interest in the topic outside the UK and Ireland is almost non-existent.

Two research notes published by the investment bank today make the case that this is a mistake: "the referendum matters, because whatever the outcome the status quo will not be maintained". Even if Scots vote No – and polls continue to suggest that they will – the referendum will "still lead to significant changes for the UK, and perhaps for Europe".

Traders may have to price in a risk premium, especially for bond and currency markets, ahead of the referendum vote and after. Particularly if the No vote is "sufficiently narrow as to raise the prospect of a further vote in the near future". A No vote that falls below 55 per cent support "would at least keep the possibility of a further referendum alive politically".

UBS notes that in Quebec there was a second referendum just 15 years after a 60:40 vote against independence from Canada, after the separatist Parti Quebecois won the 1994 election, taking control of the provincial government. But it's worth noting that support for the No campaign is strongest among younger Scots.

Nonetheless, a tight margin will see financial markets faced with what UBS coins "the Quebecois risk" adding a "persistent background hum of political uncertainty to UK investments and in particular to sterling and the gilt market".

The bank highlights the 1995 Quebec independence referendum as an example of the potential for deposit-shifting. With a considerable chance of independence on the horizon, the election was preceded by a disproportionate slowdown in bank deposit growth in Quebecois branches of banks.

After the vote, bank deposit growth in Quebecois still lagged Canada, for around seven years. 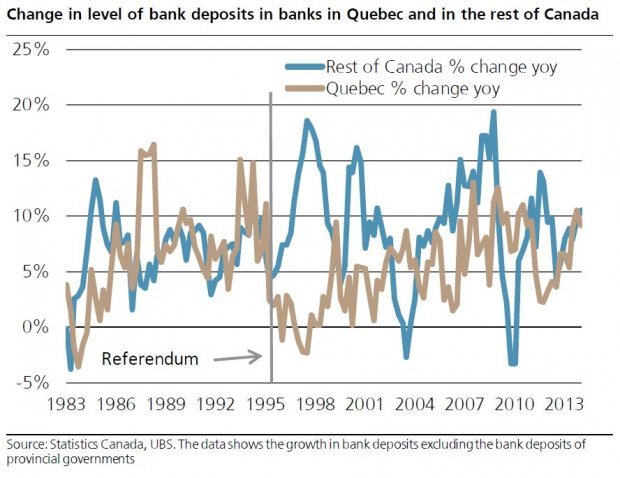 Will Scottish savers be similarly cautious before and after their referendum? If they are, and deposit flows go south, then UBS see things getting trickier for the Bank of England. If money moves across the border from a newly independent Scotland, then the money supply could grow faster than its economy.

A No vote would still see some fiscal devolution within the UK, which UBS sees as potentially affecting the country's debt dynamics in a marginal way. For investors, this raises questions about the validity of debt-to-GDP metrics for the government, as the UK will not be able to freely raise taxes on Scottish GDP.

And Scotland remaining a part of the UK is seen as lessening the chance of a UK exit from the EU, as opinion polls show that Scots are generally more pro-EU than the UK as a whole. Although UBS does say that "other forces are clearly at work on this vexed topic".

As for a possible Yes vote: The Swiss bank thinks that pundits are naive to suggest that they can forecast the outcome of whatever negotiations would follow. "History suggests that politicians may well be overtaken by events and in the event of a Yes vote it is the potential for capital movement and the concerns of ordinary citizens that will likely shape the structure of separation."