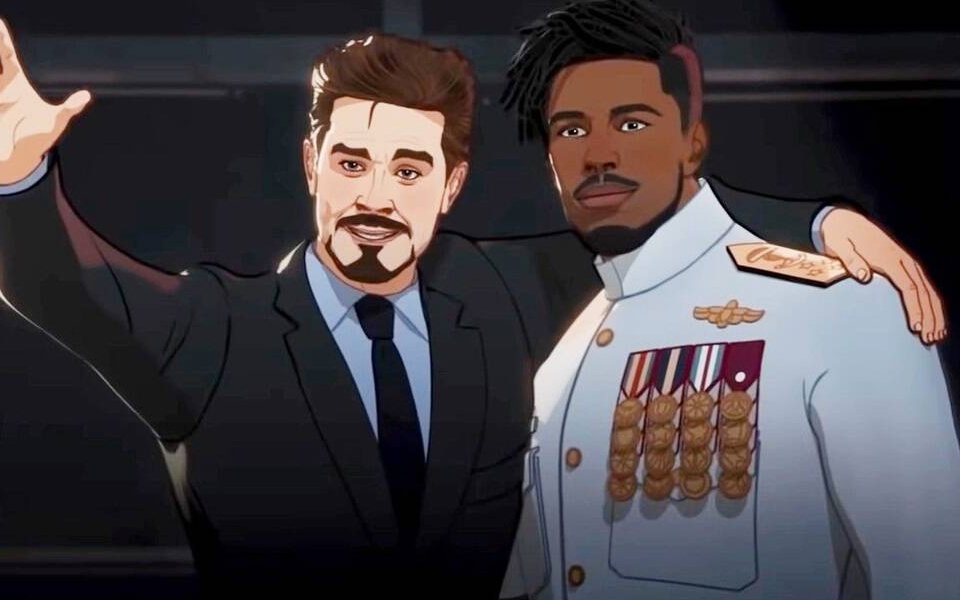 WARNING: Spoilers ahead for all current episodes of Marvel’s What If…?

New heroes, bad choices, zombies… What If…? has explored a number of different possibilities in the handful of episodes so far. The majority have also ended on a bleak note – two episodes witnessed the Avengers being wiped out, while one saw an entire reality destroyed. The series’ ruthless streak continues this week as a baddie from the past gets his spotlight.

We start with our clearest look at The Watcher so far. He resembles voice actor Jeffrey Wright (if he had a bulbous head and glowing white eyes), raising questions as to whether this is building up to a live action appearance either in the movies or the series finale? The mid-season sneak peak below suggests a team up of sorts…

“Heroes are not born, they are forged in darkness, shaped in battle, defined by sacrifice” he says, before playing a highlight reel of Tony Stark’s (Mike Wingert) best moments. We then go back to the genesis of The Marvel Cinematic Universe, where Tony was first attacked by militants. However, instead of being captured and forging Iron Man in darkness, he is rescued by Killmonger (Michael B Jordan).

The Black Panther villain was killed at the end of the 2018 hit, but occupied shades of grey as a man seeking justice for the killing of his father. There were also many undertones of America’s colonial history in his characterisation, meaning he’s not exactly a straightforward rogue, and a prime candidate for this kind of series.

“Though a man was saved, a hero was lost, and a villain was given a second chance” The Watcher says as Tony is never inspired to be a hero, and takes Killmonger into his organisation as Chief Security Officer. Questions are raised about why he was in the vicinity of the attack, which are allayed when he reveals he uncovered the plan orchestrated by Obediah Stane (Kiff Vandenheuvel doing a solid Jeff Bridges impression). With Stane gone, Killmonger is now COO of Stark Enterprises, but Pepper Potts (Beth Hoyt) isn’t convinced. Liaising with James Rhodes (Don Cheadle), her
suspicion comes from Killmonger’s lack of motive for being Tony’s new BFF.

Wingert does a great job of replicating not just Robert Downey Jr’s voice, but the quick wit and rapid cadence of the actor. Jordan is more deadpan, but he’s playing a brooding character. The pair have an interesting bonding session as Stark helps build Killmonger’s dream project – automated soldier The Liberator. There’s a little in-joke during the process when Tony thinks of miniaturising an arc reactor for a power source, then dismissing it as “a dumb idea” before Killmonger says they need vibranium, and Tony knows where to get it.

Here’s where things get a bit murky. Stark sends Rhodes as a military envoy to get the vibranium from black market dealer Ulysses Klaue (Andy Serkis) and all hell breaks loose. It becomes clear this was a setup, as Black Panther T’Challa (Chadwick Boseman) is lured to the scene to reclaim stolen Wakandan weaponry. Killmonger disarms Rhodes and T’Challa and kills them both. It’s delicately handled, but just over a year own from Boseman’s death seeing his character be killed and subsequently buried feels uncomfortable.

It’s just the start of his reign of terror, however, as Killmonger then kills Tony when the billionaire finds out he was behind the deaths. The Wakandan spear used as the murder weapon is interpreted as an act of aggression on the US, and General Ross (William Hurt) seizes control of Stark Industries assets in order to make more liberators.

Killmonger then kills Klaue, and brings the body to the Wakandan royal family in order to convince them he’s on their side and that The Americans are coming to avenge the deaths of Rhodes and Stark. They buy it, and Killmonger leads the charge against the Liberator army. Using his knowledge of the tech and some sneaky tactics, Wakanda is victorious and Killmonger is made the new Black Panther.

To be honest, it’s all been dour up to this point. The episode’s question “What If…? Killmonger Rescued Tony Stark?” is answered with a lot of death, and without any real opposition it becomes a bit of a drudge. However, we have a wonderful scene in the spirit world where T’Challa meets his father in the Black Panther film. Here it’s Boseman’s T’Challa, questioning whether Killmonger’s violence was justified. “Power unearned can be a very volatile force, cousin” he advises, suggesting this isn’t the victory he thinks it is. He is of course right, as T’Challa’s sister Shuri (Ozioma Akagha) learns of Killmonger’s deception, and in the final scene teams up with Pepper to plan to take him down.

Maybe it’s because the last few episodes have been less-than-cheery, but there was something unsatisfying about this week’s episode. Killmonger is a terrific character in the film, but seeing a villain win at every turn is hard to engage with emotionally. Less was made of his reasons for revenge, meaning this wasn’t quite the moment in the sun it could have been. An interesting episode, but a What If…? that might have benefitted from some replanning.

New episodes of What If…? are available every Wednesday on Disney Plus.