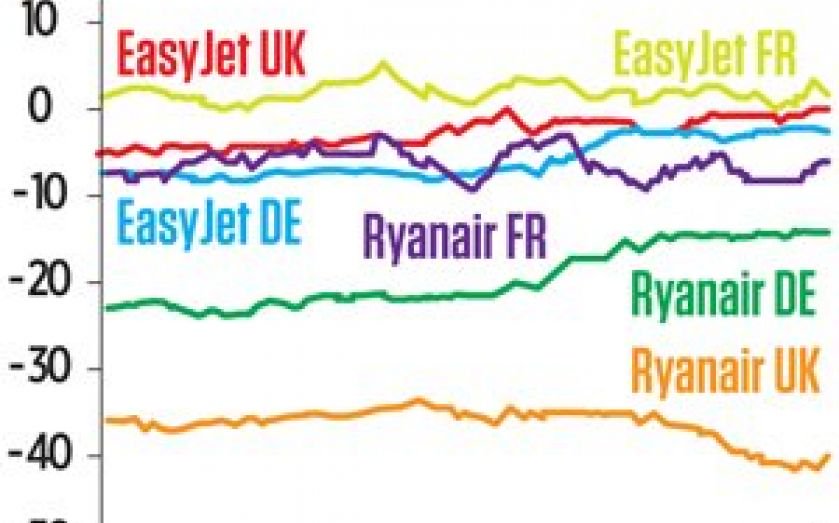 RYANAIR, the discount airline that people love to hate, has promised to transform its “macho and abrupt culture” and turn over a new leaf as a more friendly and customer-focused business.The new strategy will include an overhaul of its website, a new team to respond to emails and a pledge to stop fining customers for carry-on bags that are barely over the size restriction. Plus, it is now on Twitter – @Ryanair.The change in direction comes amid shareholder concerns that the company’s reputation for shabby service is limiting its capacity for growth.But how hard will it be for Ryanair to get consumers to view it more positively? Using YouGov BrandIndex, we can measure the brand’s performance in Europe’s three largest markets: Germany, the UK and France.Looking at Ryanair’s overall Index scores (a composite of six key measures of brand health) we see that the brand has the most work to do in Britain, where it has an Index score of minus 40.8.It is much better off in Germany (minus 14.5) and France (minus 6.4), but in all three markets it is not a case of where Ryanair is most liked, but rather where it is least disliked.Ryanair competitor EasyJet beats it by 40 points in the UK, 12 points in Germany and eight points in France.But when we look at the Consideration metric, which asks consumers which brands they are considering purchasing, it is a far sunnier picture for Ryanair, and helps explain why it is Europe’s second largest airline after Lufthansa.Brits are more likely than their Franco-German neighbours to say they’re thinking of flying Ryanair, with a score of 13.4, followed by Germany (7.4) and France (4.8) – although even on this measure, EasyJet comes much higher in the UK, with a score of 34.Nonetheless, while many consumers across Europe have a pretty dim view of Ryanair, that does not put them off taking advantage of its low prices.Our research suggests that if the company were to succeed in improving its customer service (and therefore how consumers regard the brand), it could build upon its market position and take its already formidable success to new heights. But in the meantime, it has a lot of work to do.