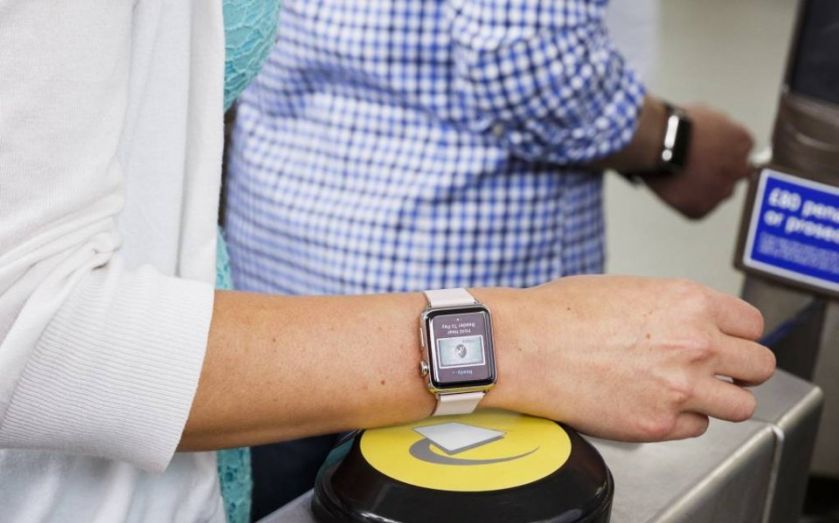 If you're the proud owner of an iPhone 6, 6 Plus or Apple Watch you can now spend your cash with little more than the flick of a wrist.
Apple Pay has today launched in the UK, allowing people to use near field communication on their iPhones to tap and pay for items worth up to £20 in high street stores throughout the country.
The UK is the first country outside the US that Apple has launched its contactless payment system, with big name retailers such as Waitrose, Marks & Spencer and Boots among those to have signed up.
But HSBC confirmed today that it was not among the launch partners, though it had been on the participant list as recently as Monday.
The bank had been expected to be amongst the first to offer the system, but has now said it will join the service at the end of July.
Barclays – which has its own payment system –  has confirmed at the 11th hour that it would be offering Apple Pay "in the future".

Users sync up their credit and debit cards through Apple’s Passbook app, for use either in a physical high street store or online.

Which Apple gadgets do I need to use it?

Only people with the latest generation of iPhones, or an Apple Watch, will be able to use it in stores.
Unlike contactless cards, Apple Pay includes an extra security measure known as "tokenisation", which ensures that the card details stored on a phone are never passed to the retailer. Instead, the payee receives a one-use “token” allowing them to debit the payment only once.
The payments are secured and verified by the owner’s fingerprint using Apple’s Touch ID system. This might make it slower but it should be more secure.

Which stores are accepting it?

Quite a few. You can find our A-Z of businesses accepting Apple Pay here.

Which credit or debit cards can I use?

NatWest, Nationwide Building Society, Royal Bank of Scotland, Santander and Ulster Bank and MBNA have signed up for the first wave. First Direct and HSBC will join later in July, followed later by the likes of Halifax, Lloyds Bank, M&S Bank and TSB Bank.
Barclays confirmed this morning it would also be taking part in future.